The venerable TTABlog® by John Welch recently reported on three TTAB decisions (here & here) that found “beer” and “wine” to be related goods under the likelihood of confusion analysis.  Each decision relied upon evidence of 10 to 20 third-party registrations that identified both “beer” and “wine” together.  Third-party registrations are routinely used to show that two goods and services may be offered by the same source under the same mark [f.n. 1], but sometimes they are used to support counter-intuitive results that elicit groans of skepticism from the Trademark community. After all, as one TTABlog® commenter put it: “I can’t think of an example of a beer and wine issuing from a common source. I’ll pull the cork on a Heineken Pinot this weekend and maybe something will come to me.”  John Welch agreed, calling these cases “Alice-in-Wonderland-ish.”

When properly used, third-party registration evidence can be quite helpful in estimating how frequently two goods emanate from the same source.  However, these “Alice-in-Wonderland-ish” decisions occur because parties rarely provide sufficient context for the Board to determine how probative third-party registrations should be in a particular case and even which finding they support. Consequently, one explanation for the Board’s remarkably consistent jurisprudence on the relatedness of “beer” and “wine” is the equally consistent failure of practitioners to present the Board with the proper information.

The opposite is also true when uncommon goods and services are at issue.  There are currently only about 20 live, use-based registrations for “nuclear reactors” in Class 11.  If an Examining Attorney came forward with as many as two third-party registrations listing both “nuclear reactors” and some other uncommon product, the Board ought to consider it fairly compelling evidence of relatedness. After all, such evidence would be consistent with a finding that approximately 10% of the providers of goods in one relevant industry overlap with those of the other relevant industry.  In such a case, it is more likely that the relevant consumers are accustomed to seeing both goods offered by the same source.

With this in mind, how persuasive is it when Examining Attorneys produce between 10 and 20 third-party registrations that identify both “beer” and “wine” goods?  In my opinion, this is very persuasive evidence that “beer” and “wine” are not related goods. As illustrated below, the Trademark Registry evidences very little overlap between sources of “beer” and “wine.”  The last time this firm looked into this specific issue, we found approximately 7,900 live, use-based registrations identifying “wine” and approximately 3,600 identifying “beer”.  Among these, only about 32 listed both.  Admittedly, these totals are not absolutely accurate because one needs to account for factors like multiple registrations owned by the same party, but these figures are sufficient to illustrate that third-party registrations need to be considered in light of how often the relevant goods and services appear on the registry. 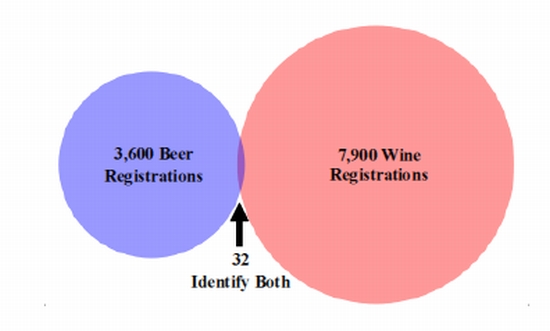 The Board’s most recent precedential decision on this issue essentially repudiates this particular argument. See In re Kysela Pere et Fils, Ltd., 98 USPQ2d 1261 (TTAB 2011).   In my opinion, the Board’s reasoning is incorrect because it confuses evidence of what’s merely possible with evidence for what is probable.  The question before the Board is whether “consumers are likely to believe that such goods and services emanate from a single source.” Id [emphasis added].  The number of third-party registrations identifying both “beer” and “wine” shows only that it is possible that both goods originate from the same source.  To determine how probable or likely a given source is to offer both goods, one must first know how many sources only offer one or the other.

Applicants also have an additional argument at their disposal in “beer” and “wine” cases. There are many third-party registrations showing that different entities often coexist with one another, even though one has registered its mark for “beer” and the other has registered an identical or similar mark for “wine.”  The Board has recognized that “applicants may submit sets of third-party registrations to suggest… that the Office has registered the same mark to different parties for the goods at issue.” In re G.B.I. Tile and Stone, Inc., 92 USPQ2d 1366, 1369-70 (TTAB 2009); see also In re Ayurvedic Concepts, Ltd., Serial No. 78800436 (TTAB December 5, 2008)[not precedential].  This firm recently prepared a response to a 2(d) refusal of an application for “beer” based on a prior registration identifying “wine”.  In that response, we identified 45 pairs of the same or similar marks coexisting on the register.  []  This evidence never reached the Board for decision because the refusal was thereafter withdrawn by the Examining Attorney, but we believe this type of evidence ought to be persuasive at that level as well.

In summary, there are two lessons to be learned from the above example.  First, even when an Examining Attorney comes forward with numerous third-party registrations that properly identify both relevant goods, additional context may reveal that this evidence actually supports a finding that the goods are not related. Second, because of selection bias, past TTAB decisions are not always informative about what goods and services may be sufficiently related to result in a likelihood of confusion refusal.  By definition, parties that present the best evidence to the Examining Attorney are less likely to end up in an appeal before the Board in the first place, so a certain number of these “Alice-in-Wonderland-ish” beer/wine decisions are inevitable and may not be representative of all applicants’ actual chances of obtaining a registration.

Despite the recent TTAB decisions, the good news for applicants is that there is no per se rule that “beer” and “wine” are related.  At the TTAB, each case must be decided on the record before the Board.  Therefore, the next time the Board considers a beer/wine case, it is possible that the applicant’s evidence will lead the Board to a different result.  In the meantime, if the Board’s beer/wine decisions have you warning your clients away from marks for “beer” because of potential conflicts with registrations for “wine,” it may be worth reconsidering this advice.

[1] For a useful summary of Board decisions on the use of third-party registrations to show relatedness of goods and services see Third-Party Registrations at the PTO, by the Judge James Walsh and Michael E. Hall.  Link provided courtesy of the TTABlog.

0 thoughts on “Through the Looking-Glass: Beer, Wine, and Third-Party Registration Evidence Before the TTAB”