The following is a transcript of a Tricks of the Trade(mark) podcast episode. You can listen to the episode here.

The trademark we’re going to talk about is actually the name of this podcast, which I’m pleased to report was just recently registered. Tricks of the Trade(mark)® is now a registered trademark at the U.S. Patent and Trademark Office. If you want to look it up, the registration number is 5629551, and that application was filed on March 21st, 2018, so not that long ago. One key part of the process begins even before the application is filed, and that of course is a search to gauge what the odds are of the application having a conflict, or a significant refusal based on likelihood of confusion. So before I filed that application in March of 2018, I searched the USPTO records so that I knew the application would be likely to be approved without a conflict.

Another important part that began before the application was even filed, was the drafting of the application, and properly describing the goods and services. Okay. The goods and services in this application were described as, “Downloadable podcasts in the field of law, intellectual property, marketing brands, and trademarks.” A proper description is valuable to the entire application process and to the protection that the trademark registration ultimately is granted. The application was filed in March, and then it was reviewed by an examiner in July. It was assigned to an examiner on July 2nd, 2018 according to the USPTO records. So it sat at the USPTO for about three months, and a few weeks, before it ever got opened and reviewed by an examiner there. That is typical. That is how long the process takes.

Then this application, because there were no conflicts found, and because there were no amendments to the description necessary, or no other tweaks necessary when it was reviewed by the examiner, was approved right away. It was actually assigned to the examiner on July 2nd, and it was given the initial approval for publication on July 2nd. Then the next step was to publish the application in the public records of the USPTO, which is also called the Official Gazette. Because it’s the Patent and Trademark Office, and they’re handling a huge volume, and all of these procedures take time, and they also deal with some international treaties, and syncing our system with how others work around the world so that others know what’s going on in the U.S. if they were monitoring an application.

So from the time it was approved for publication July 2nd, it wasn’t actually published until the Official Gazette of August 7th, 2018. So that was another five weeks or so between the approval and the publication. The publication window is 30 days at a minimum. Here, no extension or opposition was filed, so the publication window was only 30 days. Then the next step, after the publication, was the granting of a Notice of Allowance. A Notice of Allowance was granted because evidence of use had not been submitted at the time of the application, I had not yet launched the podcast when I filed for it. I wanted to get the protection as early as possible, so I applied for it before it was actually launched publicly. Now the trademark office said on October 2nd, 2018, “You’ve been approved. You’ve been published. Now we issue a Notice of Allowance, and we’re ready to receive evidence of use.”

Once it was accepted on November 2nd, it still was then another five weeks until the Registration Certificate was issued on December 11th, 2018, and that is the date of registration. So even though nothing significant happened between the approval of the evidence in early November, and the certificate being issued in December, from our perspective on the outside, again, there were still things happening at the USPTO. The Registration Certificate had to be prepared, and I’m not sure even what else goes on on the back end, but even that simple step took another four or five weeks.

So altogether we go from mid to late March, to December 11th. Again, that was an application that went essentially as smoothly as possible. Most applications have some back and forth with the examining attorney, or some hiccup, or there is some point in the process where a response is necessary and the applicant doesn’t respond on the very next day like I did. That’s why the average application takes 12 to 14 months. I want to also just briefly share that an application can take much, much longer if there’s a complication, if there’s a significant refusal, if there’s a opposition filed during that publication period, or if there are extensions filed, all of those can drag it out for months or years.

I once had an application that, believe it or not, took nine years to become registered. That’s because the examiner had suspended our application pending some other applications, and then it turned out that those other applications were involved in some litigation and disputes. So to sort out all of those different steps in the chain before they could finalize the status of this application took nine years total. But the applicants stuck with it, and they got a Registration Certificate. So the important thing is to understand the process, and to be patient. 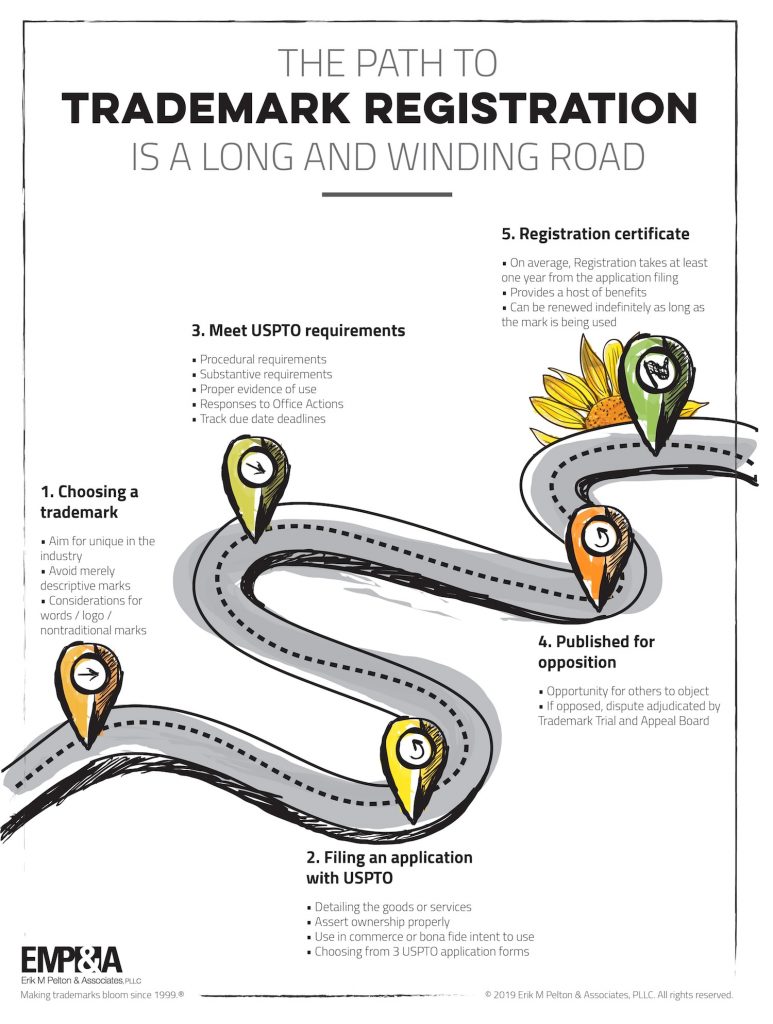 5 thoughts on “How long does USPTO trademark application process take? The only honest answer is “I don’t know””