My friend Chad, who helps me record this podcast, often asks me about international trademark protection, not only for his trademarks which are registered in the United States, but in general curious about the interplay between US protection and protections abroad. This is a question that I get from a lot of people a lot of the time.

There is no single international trademark registration that has any kind of coverage worldwide. A trademark owner, a brand owner, has to essentially go country by country to seek protection, which can be cumbersome and quite expensive, as you might imagine. Each country has their own trademark laws. Many of them are similar in many ways, but they all generally have their own unique twists and their own application process with their own government agency that reviews them. So, in order to apply in other countries, you may need an expert who’s familiar with that country’s system and laws and government agency and processes. That’s one of the reasons that it’s cumbersome and expensive.

However, there are some overlaps and there are some international treaties that help streamline and simplify the process a little bit, and trademark experts who do a lot of international work will be familiar with these tools. The main one is what’s called the Madrid Protocol. It is a treaty that many of the industrial countries are party to, including the United States, including recently Mexico and Canada, and includes the European Union, and includes China, which is very important because a lot of brand owners want protection in China. Through this treaty called the Madrid Protocol, trademark owners can generally more simply and more affordably export a US record (an application or registration) to the other participating countries to be reviewed under their system, without having to go through a whole more formal separate application process. The application will still be reviewed under their country’s guidelines and parameters for conflicts and other things, but the process is simpler and requires less foreign counsel, and it’s generally much less expensive.

There is, however, one main drawback to using the Madrid Protocol: which is that all of these records then are tied together, tied to the underlying registration which may be in the US in many instances that I’ve dealt with, and they’re tied together through the international body (WIPO or World Intellectual Property Organization) that then exports the data to the other countries. The drawback is that if that underlying registration is canceled, or challenged, or not renewed, it affects all of the other ones that are connected to it, so it has a domino effect. Whereas if one applies independently in China, or the European Union, or the United Kingdom, then – although it is more expensive and more cumbersome – the applications are not interrelated to the underlying registration, so that if something happens in one country, it wouldn’t affect the other country.

I mentioned the United Kingdom. Since the Brexit vote of a few years ago, they are still undergoing the regulation process and developing the rules for what will happen to European registrations once the UK is no longer part of the European union, but it does look like that protection will still be granted in the UK and in England. Trademark registration in the European union provides a tremendous value internationally, because there is one registration available that covers the entire EU, and so that really is the best bang for the buck, I tell clients in terms of extending protection internationally.

But the really the important consideration that I talk to clients about is whether they’re doing enough sales in any particular country to justify the expense of filing internationally, and then if they are, picking and choosing which countries make the most sense. It really comes down to the volume of sales and the percentage of business that comes from that country as to whether or not it would justify the expense of what generally is going to be a few thousand dollars minimum to seek protection in another country.

Another consideration is if there’s manufacturing going on abroad (most frequently for clients that I’ve dealt with is in China) then there is an extra reason, an extra benefit to make sure the trademarks are protected in that country where the manufacturing is occurring, even if there are no sales occurring there, to ensure that you have some protection if something goes sour with the manufacturing relationship, which occurs more often than we’d like it to.

As you can see, international trademark protection is rather complex and tricky. If you are looking for an expert to help guide you through the process, connect with me here. 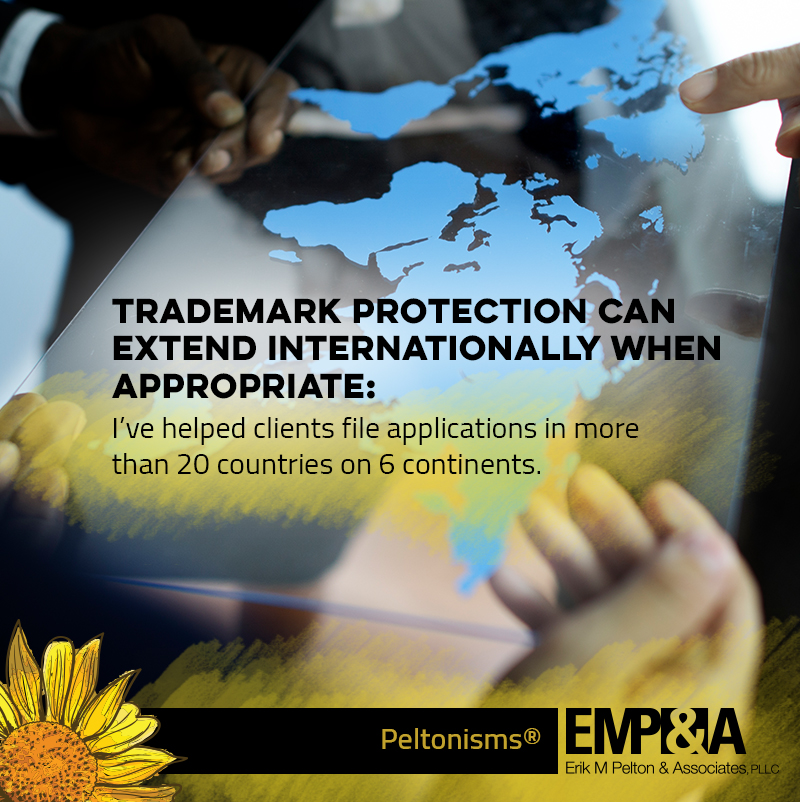