The following is an edited transcript of my video Letters of Protest at the USPTO. 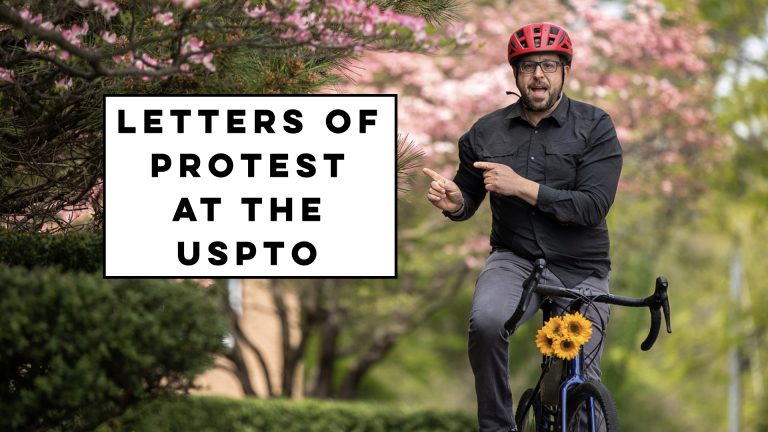 The reason that a letter of protest is important is, first, because it could block or affect that application review. The second is that it’s a useful tool when sending one in appropriate circumstances, which we’re going to cover in a moment. It’s a useful tool for sending one, because if it’s successful, it can be a lot less expensive and a lot less time consuming than having to fully dispute or oppose the application after it gets approved by an examiner at the USPTO.

This is real shop talk, kind of nitty-gritty, and there’s a lot about it in the Trademark Manual of Examination Procedures (TMEP). I would recommend that you look at it for more details if a letter of protest is something that might be applicable for you. I also recommend that you work with an experienced attorney, but letters of protest have increased significantly in recent years, and there’s been a lot of chatter online about them. That’s why I want to address it here, because there’s also a lot of misinformation about them online. The most common misconception is that someone could file a letter of protest based on just their prior use of the name. That is not an acceptable basis for a valid letter of protest.

There’s a filing fee of $50, which is new in 2021 (there used to be no cost associated). That filing fee will be down the drain if you file a letter of protest saying “Hey, I’ve already been using this name for five years. It should be blocked.” The examiner is not allowed to block an application based on prior use of the name. You would have to show as an appropriate ground for a letter of protest, a prior application or a prior registration for a name that is likely to be confused with the name in the application.

There are other grounds for letters of protest. The other most common one would be to share information about a mark being descriptive with the examiner or possibly generic. There are other grounds where a letter of protest may be an acceptable tool, but again, there are situations where a letter of protest is not an acceptable tool, and it’s important to know the difference.

If you want to learn more about letters of protest, I recommend that you research more, read the TMEP. There’s an example on my blog at ipelton.com from a few years ago, at least one example of what a letter of protest looks like. But I do recommend that you consult with an attorney before sending one, and especially if you are aware that your application has received one, because they are complex and it is a potential sign of a larger dispute that may be forthcoming, so it’s important to know all the ramifications and options when dealing with that letter of protest.