Last week I had the pleasure of attending the Senate Judiciary Committee hearing on “Oversight of the Office of the Intellectual Property Enforcement Coordinator.”  A webcast is available. It has been quite some time – law school – since I last saw our Congress in action. The following is a report from the hearing including my comments.  In short, I believe that the panel and witnesses have used scare tactics to ensure that the interests of big business are addressed, and that there is little inquiry or actual oversight regarding other steps that could be taken ensuring balance in the action items proposed. 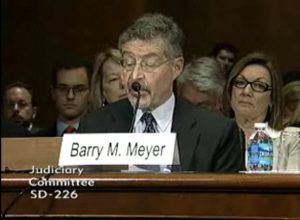 Me in background (far left) at Senate hearing

The hearing included two parts, the first a report from Victoria Espinel, the first Intellectual Property Enforcement Coordinator, and the second testimony from four industry members – from Warner Bros., AFL-CIO (represents many unions including several that work in film, television and music), U.S. Chamber of Commerce, and Carlin America (a music publisher).

A brief summary of the hearings:

My comments on the Joint Strategic Plan and Ms. Espinel’s testimony:

Entertaining highlights from the hearing:

The focus of greater attention and resources devoted to Intellectual Property issues by Congress, by Ms. Espinel’s office, and by business is a good thing.  But I believe that these resources and time need greater focus and more balance between the interests of large companies and owners of intellectual property on one side, and the growing number smaller businesses who rely on trademarks, copyrights and patents as core elements of their success.