I love a cup of good coffee. Sometimes I just love the smell of a coffee shop or a coffee roasters, and the atmosphere in a nice café. Of course, wherever I go, I’m always looking at and thinking about brand names and trademarks. There’s a coffee shop near me that sells a brand of coffee called Counter Culture. I think this is a brilliant, great name. You get your coffee at the counter, but Counter Culture offer also speaks to being alternative, to being a progressive or funky brand. So, it’s a very suggestive name and that’s why it sticks with me.

But there are other places nearby where I can get coffee, one of which is called The Italian Store. This is such a descriptive, bland name. In fact, I’m quite certain that there are many Italian Stores throughout the United States. They do have great coffee, though.

There’s also a coffee roaster just down the street from my office, called Rare Bird roasters. Now, this is an interesting name because ‘rare bird’ has nothing to do with coffee beans. It’s a whimsical, arbitrary name, which does create, as we’ll see in a moment, a strong trademark.

Another suggestive name for a café, in Washington DC, is called Politics and Prose. This name is suggestive because it’s in DC, the heart of politics in our country and because it’s also attached to a bookstore. So Politics and Prose has a rhyme and alliteration to it, and it also, again, conveys that message that it’s a place where people sit and talk about politics, talk about books and literature. So, it’s a great name. It doesn’t tell me anything directly about coffee, but it tells you about the atmosphere there.

All of these names fall somewhere on the sliding scale of trademark protection.

As you see on the graphic below, arbitrary or coined names, like Rare Bird or like a made up term such as Exxon or Kodak, are entitled to the most protection, legally, as trademarks. So, they get a wider berth, so to speak, than the other types of names, right off the bat, just because of the nature of the linguistics.

A descriptive name is also weak, and it can get some legal protection, but it’s going to be an uphill battle. So, a brand like The Weather Channel or American Airlines or Cartoon Network has a very descriptive name, it tells you exactly what it is. Right up front, there’s no imagination or thought necessary to know what their services or products are. So those descriptive names start with a much smaller scope of protection. Now, over time, if they are extremely successful or spend lots of money advertising, they can acquire distinctiveness and sort of move up the scale of protection. But they start from a much weaker position.

Suggestive names such as Counter Culture or Politics and Prose hint at the nature of the products or services, but don’t tell you immediately what they are. Netflix is another great example, or YouTube, telling you that they have to do with videos or movies, but not directly like movies.com, or videowebsite.com would. So, they’re suggestive names. These, I prefer as the best types of brand names, because they are eligible for excellent trademark protection, or a fairly wide berth of protection, and they tell the consumers something about the brand.

So, Exxon doesn’t tell anything to the consumer about what it is immediately. Exxon has to spend a lot of money advertising for people to know that Exxon is connected with oil and gasoline. Amazon has to spend a lot of money to advertise to tell people that Amazon is a place for shopping. Because just on its own, Amazon doesn’t tell you anything related to shopping or books or music, it’s an arbitrary word. 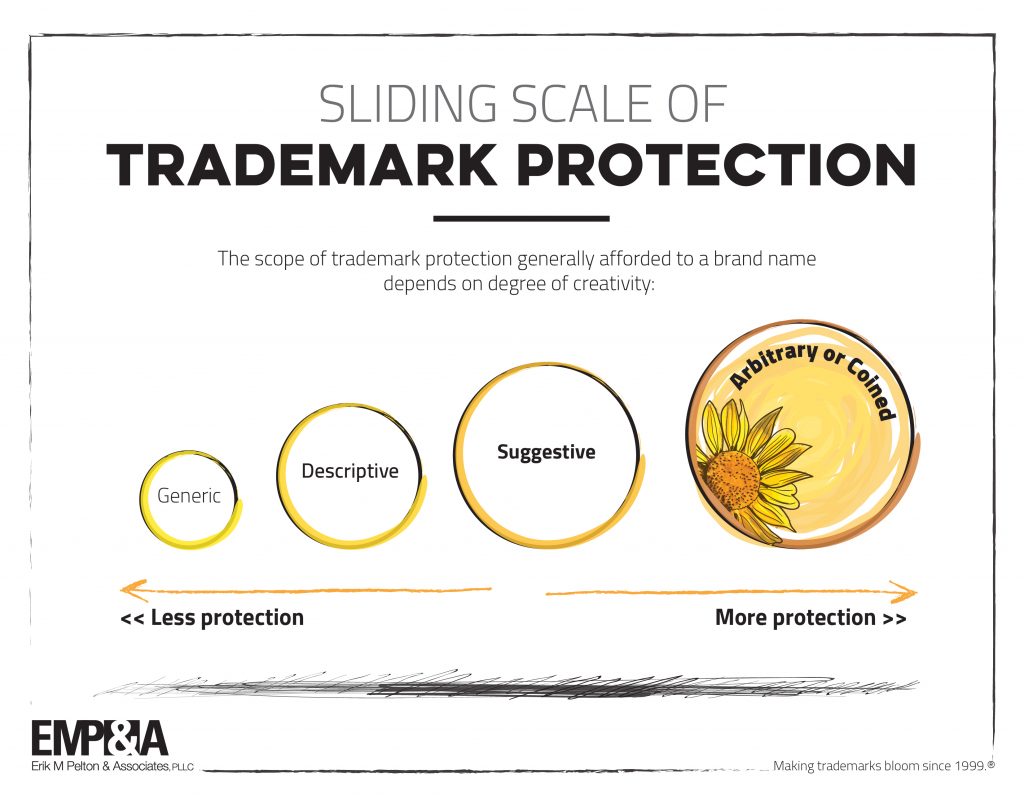