[tweetmeme source=”tm4smallbiz” only_single=false http://wp.me/pz34L-cN]
On September 2nd, the Trademark Public Advisory Committee (“TPAC”) held its quarterly meeting at the U.S. Patent and Trademark Office. Comprised of nine committee members, TPAC functions as an advisory body to the Under Secretary of Commerce for Intellectual Property and Director of the USPTO on management and operations issues. Quarter meetings focus on creating a dialogue to further improve the quality and effectiveness of the trademark application system. 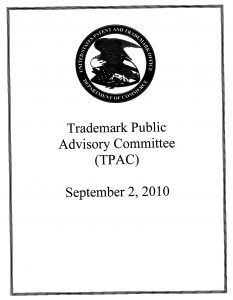 Here are the most significant issues (in my opinion) discussed at the recent TPAC meeting, which I attended in person:

For more information from the September 2nd meeting including a detailed agenda and presentations, see http://www.uspto.gov/about/advisory/tpac/2010sep02.jsp.