The Washington Redskins trademark case has, rightly so, garnered a lot of media and political attention. But another DC team also has a problematic logo in my opinion.

D.C. United is the Washington team in Major League Soccer. Their logo is:

The logo – to me – is rather reminiscent of Nazi Germany.  See below comparison from Cheezburger.com: 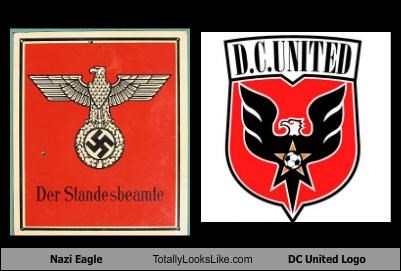 In fact, the team’s original logo only lasted for just one season before pressure led the team to change it. The original logo was even more fascist looking:

Maybe I’m the only one who thinks the current logo is too similar to Nazi imagery?