The NFL Properties applied to register the logo below for Boston Redskins in 1994.  On March 15, 1995, the USPTO suspended the application and placed in on hold pending the outcome of the dispute regarding the Washington Redskins trademark commenced in 1992, about whether it should be cancelled from the register because it is disparaging.

Now, the Redskins trademark dispute has finally wound down after 25 years when the Supreme Court in Matal v. Tam struck down the provision of the trademark statute barring disparaging trademarks from registration.

And thus the application for the Boston Redskins on Saturday was removed from suspension more than 22 years later and approved by the USPTO. It will now be published in the public records. 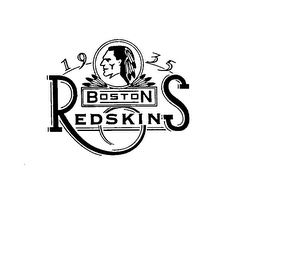