The Colts may have lost the Super Bowl®, but the merchandise printed in advance proclaiming them champions (approximately $2 million worth) will go to relief efforts in Haiti.

I thought the commercials I saw (admittedly, not all of them) were unimpressive and unimaginative except for a few.  By playing it safe, the companies that spent millions on air time missed an opportunity to stand out from the crowd and make an impression with consumers.

Next year’s Super Bowl XLV will be played outside of Dallas in the the Cowboy’s stadium.  The host committee already has a logo: 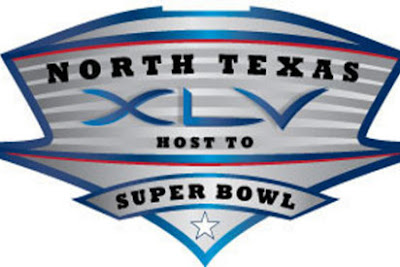 The Cowboys Stadium has a logo as well that features its design:

I’m sure we will be seeing a lot more of those logos during the next year and the build up to the Super Bowl.