A few weeks ago, the USPTO published a Notice of Proposed Rulemaking to adjust fees for trademark filings. The proposed adjustments include many fee increases, as well as some new fees.

Last fall, I spoke and wrote about the preliminary proposal. The update proposal features some modifications, but I still believe it will disproportionately impact small businesses, and I still believe the USPTO ought to provide more detail about its budget needs and in particular its IT troubles.

Small businesses: Small businesses make up a large portion of the American economy. Over 99% of employers are small businesses, and in recent decades small businesses have created more than 60% of new jobs. According to a 2013 report from WIPO, small and medium-sized enterprises rely on trademarks much more than patents. Small businesses in general don’t have an association or a stable of lawyers to work on comments to proposals like these. Yet they will be the most impacted.

And while the USPTO planned this increase before the global COVID-19 pandemic, small businesses have already been affected disproportionately by the pandemic and its economic impact; as a result, small businesses are likely to be even more sensitive to the fee increases in the near term.

Comment process: In the fall, the USPTO had limited discussions with stakeholders about the fee proposal. I am not aware of any efforts to publicize widely the fee increase proposal to business owners or small businesses. In fact, since the Notice of Proposed Rulemaking the USPTO has not sent any alerts to its subscribers or via social media to even announce the request for comments. As such, many did not find out about the NPRM until several weeks after it was published.  The deadline of August 3, 2020 is too soon and more widespread notice ought to be considered.

Financial justifications: The NPRM notes that overall, the fee increases proposed will generate approximately 20% more revenue for the USPTO. And it notes that without such revenue, the tradamark operations would face a major budget shortfall. Just a few quarters ago, the USPTO touted that the trademark division had a growing surplus. According to the most FY2019 annual TPAC report, the trademark operation collected $329m in FY2018 and spent $316m, and the trademark operating reserve grew to $135m. The TPAC report also noted that in FY2018 “the USPTO considered its 5-year financial outlook and determined that additional fee adjustments are not warranted at this time.”

This significant turnabout must be explained in more detail. Yes, there is a pandemic and resulting economic impacts; but the change described by the USPTO is much greater. More data regarding the filing and fiscal projections could be shared; and much more information about the IT shortfalls and expenses ought to be provided. While upgrading and modernizing the systems is no doubt difficult, time consuming, and costly, the delays to date have been significant and the expenditures have repeatedly surpassed budget. As the USPTO asks users for more money, I urge it to share greater details and transparency about past and future IT expenses.

Specific increases and new fees proposed:  I note there is not a single fee decrease featured in the proposal. The proposed fees for new applications would enlarge the difference between TEAS RF and TEAS+ from $50 to $100. I do not support such a gap; It is our experience that a majority of those who do not use TEAS+ choose not to use it because of the limitations of the ID manual and/or the accounting and reporting difficulties that may ensue if TEAS+ status is lost.

Furthermore, increased application filing fees will be felt disproportionately by smaller businesses – those who benefit the most from USPTO registration. I also note that any increase in filing fees may decrease the number of new applications, especially from small businesses, which would mean a less robust register.

Regarding renewal and maintenance fees, the proposed increases will likely decrease renewal filings, especially among small businesses. The increase in a Section 8 filing fee from $125 to $225 is nearly a doubling.

Regarding fees proposed for TTAB oral hearings, as a matter of equity and justice, I do not believe these are fair. Discouraging oral hearings is a disservice to the Bar and to the parties, and to fair determinations of trademark cases that are inherently complex and long. Furthermore, the fee proposed for each is greater than the fee for an entire proceeding or appeal. Again, it is clear that small businesses would be much more dramatically impacted by these fees.

To conclude, I believe that while some fee adjustments are appropriate, I wonder whether some of the larger increases could be moderated. While I firmly support the need for IT improvements, I would like to see more transparency.

I also want to reiterate that small businesses will unquestionably be more burdened by increased and new fees. A Fortune 500 company with in-house counsel and a budget for IP protection, will not be terribly impacted by increases of a hundred dollars here or $400 there. But the local restaurant, the software company started by college students last summer, and startup snack company, certainly will be impacted. A loss of protection for them is a loss for the entire trademark system and diminishes the accuracy and completeness of the register. If small businesses don’t register their marks at the same or greater rates than today, and if they can’t afford to litigate disputes when justified by the law and the facts, the harm will extend far beyond the USPTO. It will impact the small business engine of the US economy.

The full Notice of Proposed Rulemaking is here: https://www.federalregister.gov/documents/2020/06/19/2020-13262/trademark-fee-adjustment

Written comments must be received on or before August 3, 2020.The USPTO prefers that comments be submitted electronically via email to TMFRNotices@uspto.gov. 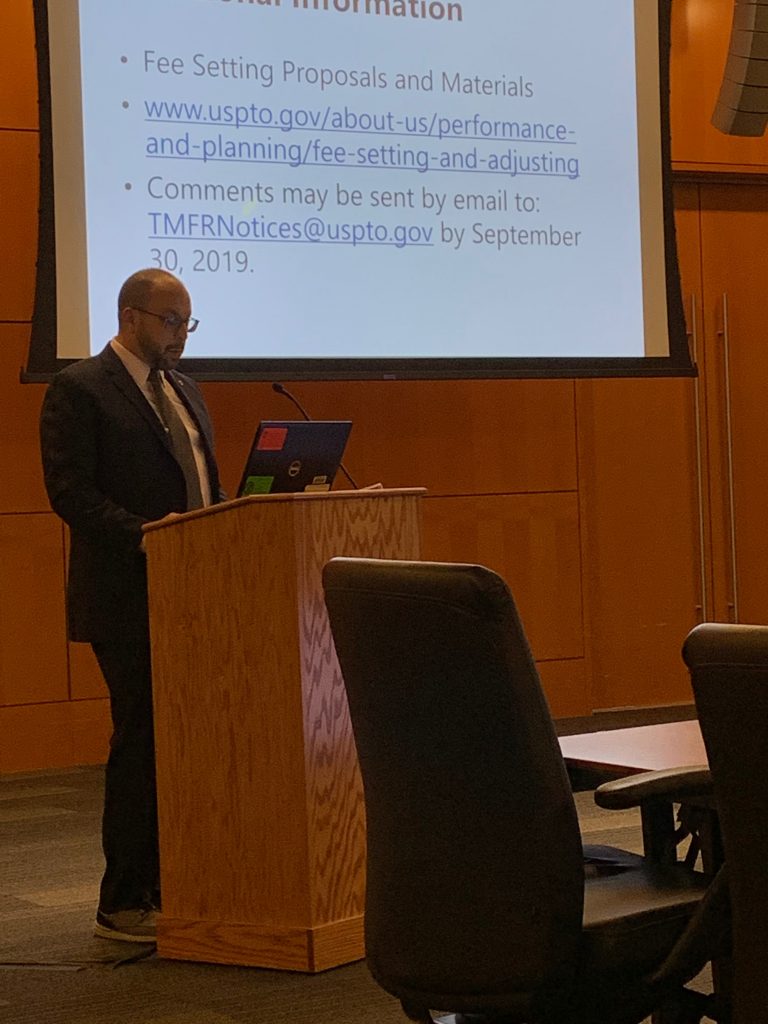