The following is a podcast episode transcript from Tricks of the Trade(mark).

I’m constantly amazed at the creativity of business owners and brand owners everywhere I go. I, of course, am always on the lookout for trademarks in storefronts, on signs, in the mall, at the sports stadium. I see them everywhere and you may also because they certainly surround us everywhere, but the creativity is astonishing. I want to give you a few examples because I know that when a business owner is trying to come up with a new brand name for their product or service or business, it can seem like it’s really challenging. It can seem really hard to come up with something creative and inspiring, but I want to assure you that creative names are out there and here’s some great examples from my recent findings.

Just this week, I’m doing some work renovating a bathroom in my house and we went to the construction big box store and bought cement board, which is what goes under the flooring, these big panels that look like drywall. The name of the cement board brand wasn’t particularly inspiring, but they actually have printed on the cement board, that will never be seen other than in the store of course, which is important but will never be seen once it’s installed because there’ll be something on top of it, drywall or flooring or plywood is a slogan for the company’s name and it says, “Gives you an edge,” and it’s a brilliant witty slogan because the edge of the cement board is really important to framing a corner or a roof or a ceiling and so I found that tremendously witty and valuable and a great trademark.

Another fun one that my kids found recently is these modified chopsticks, that are chopsticks on one end and on the other end have a spork. If you’ve never seen a spork, it’s something that people often take camping. It’s like a spoon combined with a fork. So it’s like a spoon shape with a few tines or prongs for a fork. So it’s a chopstick and a spork and they’re called Spork Chops. A fun, playful, memorable name.

Here in the Washington DC area, I see frequently when I’m driving on the highway, vans or buses that people can rent for parties or private transportation and the most prominent company has a great brand name, called Chariots for Hire. It’s a witty play on the chariots of fire name and it conveys the message of transportation and of being for hire and they also have a nice logo that goes with it, with a chariot on it. So again, a great trademark that’s around us all the time and inspiring.

Another trademark I came across recently that brought a smile to my face is for a hair salon with a logo, sort of cartoon of a lion with a big mane, and the salon’s name is Tame the Mane. So it’s a play on words and a fun thing to say. It’s got some alliteration or rhyme to it and paired with their logo, it’s especially good.

I was at a baseball park over the summer and I came across a vegan food stand and it’s called The Herbivorous Butcher and those two things incongruous. When you talk about eating vegan food, obviously there’s no real technical butchering going on and it makes the name sound fun and playful and also very important and big and serious, although it’s a playful food brand. So it was a very creative name and they also had a creative font and logo that go with it. 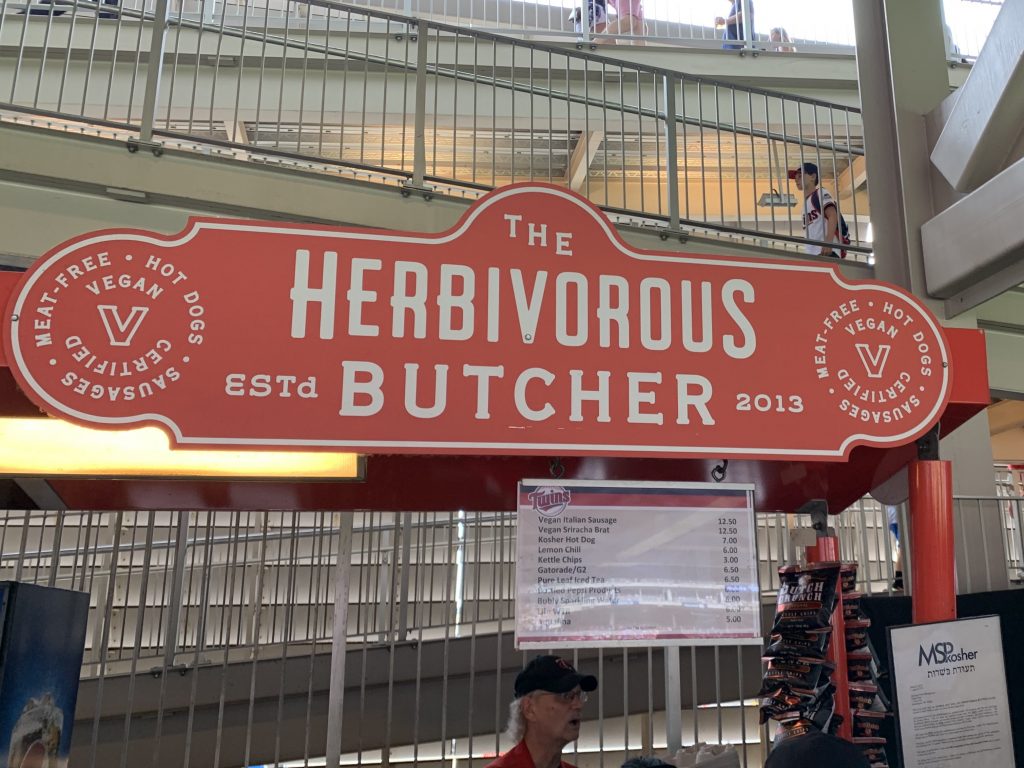 Also on the baseball theme, because I love baseball, and I’m recording this during the baseball playoffs, I learned about, at a game this summer, a nonprofit started by the Dodgers pitcher Rich Hill to raise money for fighting rare genetic diseases and the nonprofit is called Field of Genes. So it tells you G-E-N-E-S that it’s in the field of genetics and it’s a play on that famous baseball film and story Field of Dreams, a witty, great brand name.

Finally, on a trip this summer I came across right on the same block, two great names. One was a small business yarn store for knitting and sewing type supplies and it’s called Common Thread and that’s a great double entendre talking about thread and common thread and community and I thought that that was a really warm welcome, wonderful name. And there was a tiny little bar on the street and it was called Pint Sized, a witty, fun name for a bar that sells beer in pint glasses and has the name Pint Sized.

I share these with you for two reasons. Number one, great brand names are everywhere and number two, if you’re struggling to find a great name, look around you for inspiration, it can come from many different places. Creativity is all around us and is really important to building a bold brand that is going to stick out and make a difference and make an impact on your customers.