Remember the big social media stir when Chik-fil-A sent a cease and desist letter regarding EAT MORE KALE? It begin in 2011. The claim received a lot of attention, and even resulted in Congress (with urging from Senator Patrick Leahy from Vermont) directing the USPTO to study whether “trademark bullying” was a problem.

The study concluded that it isn’t much of a problem (I didn’t necessarily agree).  The EAT MORE KALE trademark application took a very long time to progress and eventually, in 2015, was issued.

Also part of the hubbub in 2011-12 was the charismatic entrepreneur behind EAT MORE KALE, Bo Muller-Moore. Bo started a kickstarter campaign relating to funding a documentary movie about the dispute. He was very active on social media, and certainly sold more shirts than he ever would have if Chick-fil-A had never contacted him.

Now, more than 6 years later, the movie is not yet complete and the saga hasn’t ended. The filmmaker, James Lantz, recently wrote a piece on Medium, From Kale to Doughnuts: Vermont’s Very Long, Sometimes Misleading, Often Confusing Tale of Eat More Kale, explaining  some of the current drama including where all the money raised by Bo went, and whether Bo and his legal team intentionally slowed the process at the USPTO (which to me does not appear to have violated any rules).

One reason the film isn’t completed is that Lantz has a pending FOIA lawsuit against the USPTO, in which he is still seeking documents regarding the USPTO’s handling of the EAT MORE KALE application.

No one knows precisely when or how this story will end. And while the circumstances – and media coverage – were unique here, it is somewhat emblematic that many trademark issues are rarely black and white and are often be lengthy and muddled with several twists and turns.

** Full Disclosure: I was interviewed by Lantz for the documentary film. 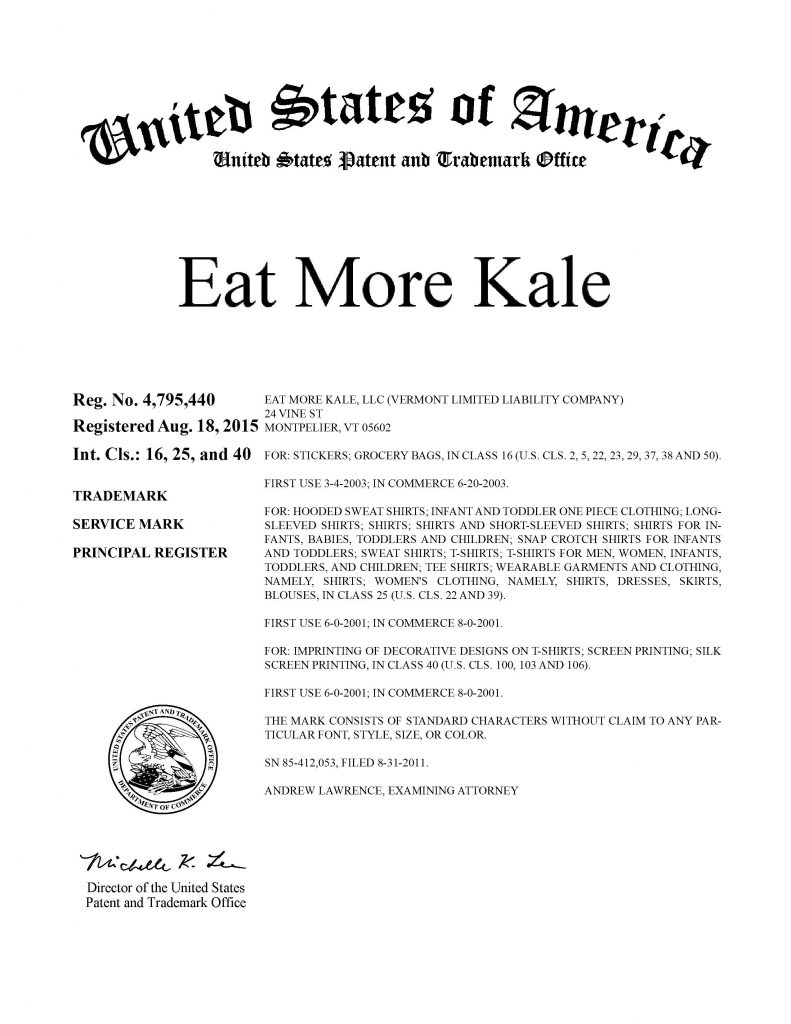