Last night, Adam Scott won the Masters golf tournament and millions watched as he put on the green jacket which is awarded to the champion. The green jacket is one of the most famous symbols in sports.  And it is not a registered trademark!

The green jacket is a tremendously valuable asset of the Masters. It is unique. It is legendary. It is rare – only one is awarded each year. And it is symbolic of the tournament, which is itself symbolic of the start of spring. But it is not a registered trademark! 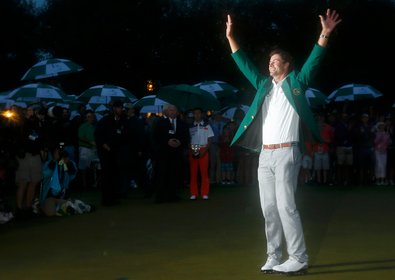 I believe that Augusta National, Inc. has missed a huge opportunity. Non-traditional trademarks include sounds, colors, shapes, and the like. And a uniform design or the configuration of a championship trophy can be registered as a trademark with the USPTO. For example, the uniforms of the Dallas Cowboy cheerleaders are registered trademarks. The blue turf of the Boise State football field is registered. The configuration of the Heisman trophy is registered. As is the Stanley Cup and many other awards.

And the absence of a registration for the trade dress configuration of presenting a green jacket to the champion of a golf tournament is shocking. Such as registration would not prevent others from making green jackets for consumer use, but it would provide more protection for use in connection with golf tournaments. And it would add to the lore of the jacket and to its value as a symbol and an asset.

Below is a list of the trademarks owned by Augusta National. Note that they include protection for the phrase “GREEN JACKET” but not for the jacket itself. Perhaps next year the winner will be awarded a green jacket that is a registered trademark?