This week the Trademark Public Advisory Committee (“TPAC”) held its quarterly meeting at the U.S. Patent and Trademark Office.As with all TPAC meeting, it was both open to the public and webcast. I attended the meeting in person.

TPAC functions as an advisory body to the Under Secretary of Commerce for Intellectual Property and Director of the USPTO on management and operations issues. This week’s meeting featured lots of information about developments with various functions and offices at the USPTO trademark office and Trademark Trial and Appeal Board. It also featured a special send off for Commissioner for Trademarks Lynne Beresford who recently announced her retirement after a career of more than 30 years at the USPTO, the last five as Commissioner. TPAC Chair John Farmer presented the Commissioner with a plaque noting that she has been the “Best Darn Commissioner”! 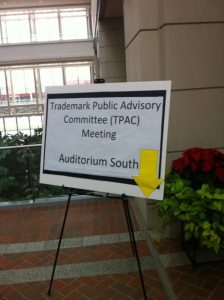 Here are some highlights from the discussions at this week’s meeting:

Documents and presentations from the TPAC meeting can be found on the USPTO website here.