Today the USPTO unveiled its trademark dashboard. The dashboard contains statistics and measurements regarding pendency and quality of the trademark operations.

This is an exciting development for trademark applicants and attorney working with the USPTO. The patent dashboard went live in September 2010.

The trademark dashboard shows that in the most recent quarter application filings are on the rise after a dip the previous two quarters. It also shows that there are more than 1,655,000 active trademark registrations, a number which continues to grow.

Currently, the average time it takes to receive an initial response from the USPTO after the filing of an application is 2.7 months, and the current “total pendency” (average number of months from filing to notice of abandonment, notice of allowance, or registration – excluding application which were suspended or involved in inter partes TTAB disputes) is 10.9 months. [Note: it would be interesting to see a pendency statistic that includes suspensions and TTAB disputes, since I believe the number of applications subject to those has been on the rise.] 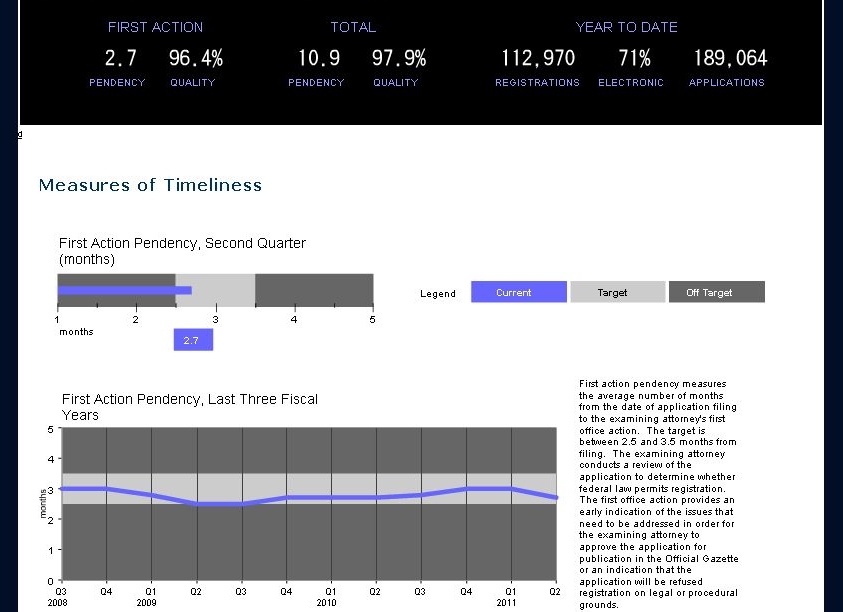 What measures missing from the dashboard would you like to see?