Less than two weeks ago I wrote about the District Court in the dispute between Louboutin and Yves Saint Laurent entering an order that resolved the case. While the dispute in the courts appears to be over, the dispute continues at the USPTO, and not in a usual forum such as the Trademark Trial and Appeal Board or an ex parte examination.

The dispute at the USPTO is before the Office of the Solicitor. The Associate Solicitor notified the parties by letter  on January 20, 2012, of the USPTO’s intention to modify the description of Louboutin’s red sole registration to read [new wording in bold]:

Now, both Louboutin and YSL have responded to the notice from the Solicitor’s office. YSL agrees with proposed language. Louboutin’s attorneys believe it goes to far. They propose the following wording [modification to registration in bold]:

The Solicitor’s office is left to interpret the language of the option from the Second Circuit Court of Appeals and decide what language is appropriate. The letter’s from counsel for YSL and Louboutin present very interesting discussions about interpreting the meaning of the Circuit Court’s decision and how far it went. See below for the full letters.

Food for thought: once the Solicitor’s office reaches a final decision, can it be appealed by one of the parties? To the District Court? The Second Circuit? The TTAB? The Commissioner’s Office? Somewhere else? Confession: I don’t know the answer. 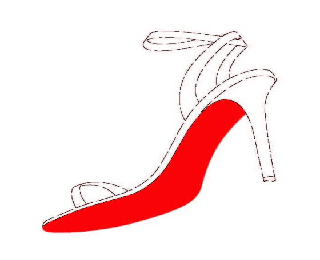